Freelove Hazard, my first finish of 2013

She was stitched one over one, and one over two, on 25 count linen, using silk threads.

Of course, it was not without some drama. Just as I was finishing up the outer border, I realized that I had cut my cuticle, and had bled onto the linen and one of the silk flowers!
Aghh! Grr! Is there anything worse than trying to get blood out of silk and linen.
I wound up re-stitching the border of one of the flowers. I did the best I could cleaning the linen. It wasn't too bad. I finally had to stop because I was afraid I would make it worse.
There is still a tiny spot on one or two threads, but I don't think anyone would notice it.

I guess it could have been a lot worse!

My next project is My Beloved from The Scarlet Letter. 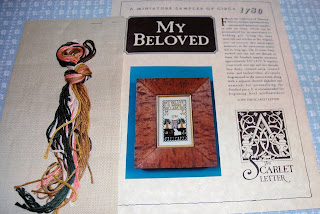 I have just started this. I will be back with an update shortly.
Posted by Erica at 12:02 PM

Congrats on a beautiful finish! Very pretty colors!
Nice choice for the new start, too.

Congratulations on a beautiful finish. Sorry you had so much drama with bleeding on your sampler.

Woohoo!! Congratulations on your finish! Freelove is beautiful. Sorry to hear about the bleeding on your sampler, but look at it this way--future generations will know you stitched by doing a DNA swab. ;) I once got a bit of hair dye--dark brown--on my linen, so I can relate! Love the new start, too.

Beautiful finish! I love Freelove, and her name too! Bummer about the bleeding, but it looks fine from here. The new start is going to be great!

Your finish is beautiful!! One time I actually snipped a thread in the linen plus it was a Christmas gift for my sister!!

A beautiful finish! Your next project is going to be a pretty one too! :)

Congratulations on a beautiful finish! A wonderful way to start the year.

Such a very beautiful finish.

Great, congratulations! And your new projects is just as beautiful.