This posting is more than overdue!

This year has not been without challenges and sorrows. It has taken me a while to be able to write about it.

Hermie was a stray. He made up his mind that he was going to live with us, and wouldn't take no for an answer!

He had cancer in his intestines, and also on his face. By the time it was found, it was too late for him.
I feel very bad about him because I think he was in a lot of pain and we didn't know it. Cats are very stoic.

Several months later, McGruff was diagnosed with heart failure. He was a stray who had a very hard life. He had been living outside for quite a while. He was missing teeth and had other health problems. He warmed up to us very quickly, but unfortunately it was some time before we could let him in the house because he always wanted to fight with our cats. We have a cat-door going into our cellar, and he spent about a year coming and going. Finally, he stopped fighting with the cats so we could let him in. Unfortunately, soon after, we lost him.

About a month after we lost McGruff, our Furrytail was diagnosed with lung cancer. We made an appointment with the vet to get an ultrasound done on the mass. While we were waiting for the phone call from the vet, to come pick up Furry,  I noticed that Blue had started acting odd, turning in circles. First, I thought he was playing, but I soon realized that something was terribly wrong. We rushed him to the vet, but there was nothing they could do for him. He had to be put down. We have been just reeling from this!

Blue's death was so unexpected. He was our youngest cat about 8 years old, also a stray. He wandered into our yard, and was living under our shed. We would see him coming and going, but it took us months to coax him out to get food. We started putting the food closer and closer to the deck. He got to know the time we would feed him, and would wait on the deck for us. During a snowstorm, I threw a towel over him, grabbed him,  and brought him inside. Blue never quite got over his shyness, but he did like to follow us around and peek at us from the top of the cabinets. He was just becoming a real member of the family when he had the stroke.

So now, we are watching poor Furrytail like a hawk. Furry is all over my blog. He always has to be in all my photos! He is older now, 16-1/2 years, but he seems to be doing ok. We decided against surgery because of his age. The vet thinks that because the cancer is fairly slow growing, that he may be able to live out his normal lifespan. I certainly hope so. I cannot stand the thought of him being in pain.
UGH! As I said, quite a year!

I will remember these little faces forever!


Ok, on to some stitching.

I finished up Cape Cod's Girls.


Then I decided to stitch the companion piece, Cape Cod's Boys. 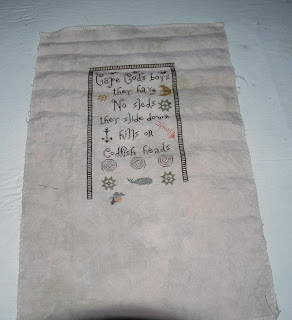 Here is the completed stitch:


Next, I started work on one that I have had in my stash for ages!

I have been plodding along on this one. This is what I have so far. 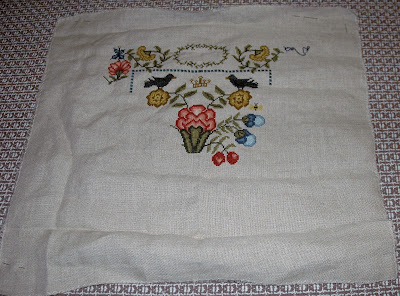 It is very slow-going. The two yellow flowers, under the birds took forever. They are done in Queen stitch. The visibility gets very limited doing this stitch, especially towards the end when it is so crowded with stitches, but it does give it a nice 3-d type effect.

I took a little break here to work on some holiday stitching.

I am stitching The Ice Crystal ornament from Mill Hill.


I am designing this to be hung in my bay window. I love the Mill Hill ornaments, but in the past, I haven't liked how they looked from the back. For that reason, I decided to make two, and put them together.

I finished the first one, and attached the charm at the bottom and the hanger at the top. 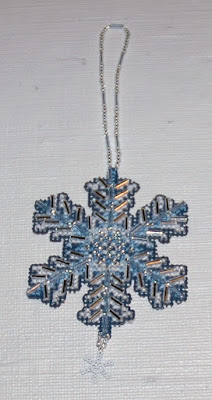 I am working on the second one now. I have finished all the stitching. Now I have to finish up sewing on all the beads. This should go faster because I will not be sewing on another charm, or making another hanger.

After I finish up the beading, I will whip-stitch them together, and hopefully they will hang nicely in the bay window.

This has been a very long post. I will leave it at that. I will be back to show the finished ornament soon.
Posted by Erica at 7:28 PM 4 comments: