Drawing at Blacksheep's Bit of the Web!

As some of you know, there are several of us out there who have been looking for the BH&G book with "Lo, How a Rose..." in it.
Great news! Edgar is going to have a drawing for his book!
To enter, all you have to do is leave a comment on his entry, http://blacksheepsite.blogspot.com/2009/04/pretty-good-weekend-and-lo-rose-drawing.html and link to it on your blog.

Good luck everyone!
Posted by Erica at 11:35 AM No comments:

If I weren't so tired, I would be doing a major Happy Dance!

I put a major push on this, worked all weekend, and finally finished it up. 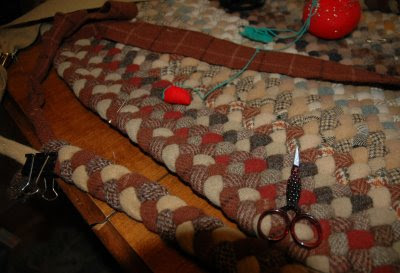 Next, the braid was cut off. (This part is very scary)! 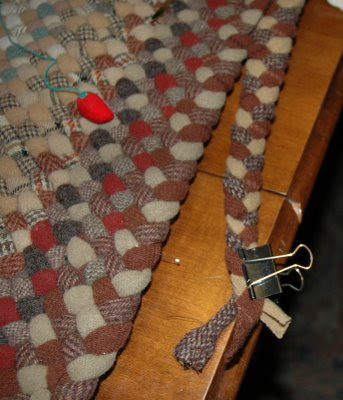 Then, about 8 inches was un-braided. The braids were tapered, and re-braided as far as they could be. When you can't go any further, they have to be sewn to the rug. This was the part I am not too sure of. It doesn't seem strong enough. I just hope it doesn't come undone!

Here is the 'rattail' finished. 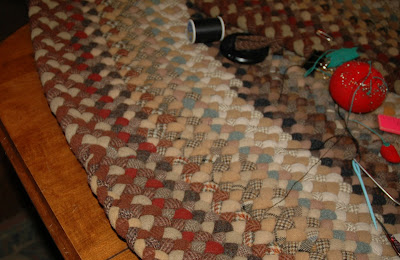 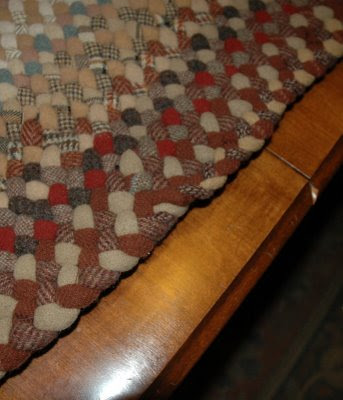 Then came the really hard work. The rug was very large, so all the furniture had to be moved!

I bought an organic rug pad to go under the rug. Not so sure this was necessary, or a good idea now. It was very hard to maneuver it into place, position the rug over it, and then cut around it. Of course it wound up a bit skewed under the rug.

Unfortunately the rug did not lie totally flat! Really an OMG moment - My worst fears!

Thank God for my steamer! It really worked wonders!

The rug lies mostly flat now, and hopefully over time one of the other ripples will work its way out. If not, I can live with it the way it is!

The final measurements wound up 95-1/2 inches (8 ft) wide by 11 ft-6 inches long. A good bit of it wound up under the couch but due to the long thin shape of the room, there was no avoiding that.

It was very hard to get pictures of this, but I tried to get some before the furniture was moved back. You can click to enlarge the pictures to get a better look at the colors (and the bumps before they were steamed away)

Gracie had to position herself right in the center to inspect it. This was before the rug pad was cut around it. 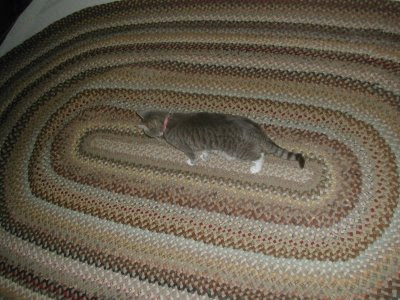 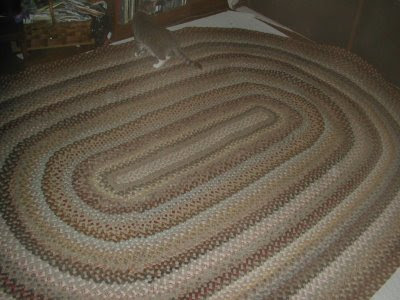 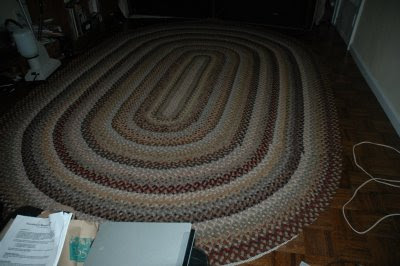 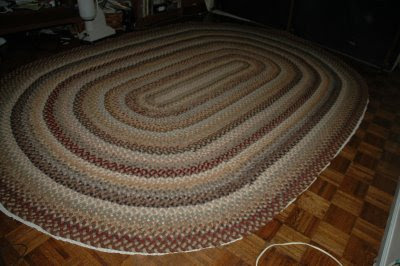 The problem with it was the weight of the rug. It is extremely heavy and maneuvering it, especially on top of the rug pad, is a really tough job.

Oh my aching back! Literally! I pulled some muscles moving the furniture that put me out of commission yesterday, but today I am a little less sore, and yes, I am very, very happy that it is finished! I will make another one for the dining room (much smaller), and I will make some small rugs for the traffic areas on this rug, but I will be taking a break for a while.

Keith helped with all the furniture moving. He thinks the rug is ok, just ok, not sure it was worth all the work.

Part One of The Old Aviary is Finished!

This took longer than it should have because of all the frogging. I decided that one of the silks from the Vicki Clayton package just wasn't right. The color description was for a "light beaver gray". The substitution color was a pale mint green. At first I tried to go with it, but by the time I got to the bottom, I decided that it just wasn't right. Soooo.... a lot of frogging. I removed all the pale mint green and replaced it with a grayish green silk in my Splendor collection. It was a little different in appearance but not enough to detract from it.


I finished up the large alphabet in the satin stitch.

At the end of the row there are some medallions that are done in a rice stitch, and one eyelet stitch at the end. The rice stitch is a lot of fun and displays very well.

The next was the dividing row, which was done in an elongated smyrna stitch (over six).

The last section is a twining vine with rose colored flowers. The vine and leaves are in cross stitch, and the flower in done in a Ribbed Spider Web Wheel (over 6). Oh my gosh! This stitch will drive you crazy! It is very hard to see the holes for this with 40 count!

Here is the final result: 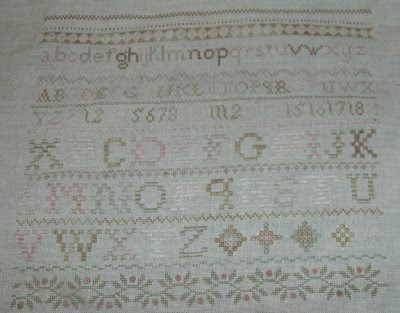 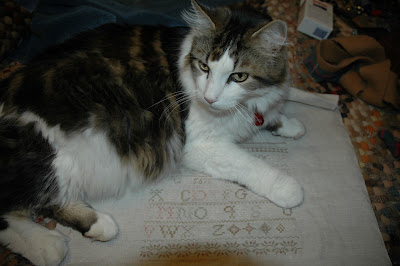 This weekend was absolutely bitter cold with howling winds of 40 mph. We planted two little apple trees and nearly froze to death!

It was a good weekend to stay inside and work on the rug.

Several days ago I finished up row 55. 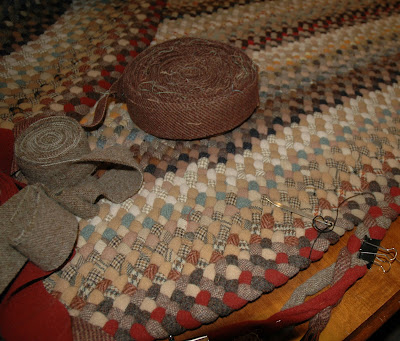 I just now finished up row 56. 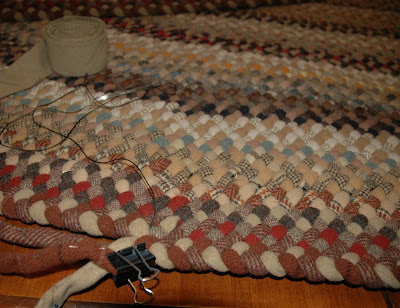 I cannot believe there is only one more row to go! What was my life like before I was working on this rug? I can barely remember!

The last row is a whopper of a row though, and will take quite a bit of time! I have to make all of the wool rolls which includes dying some wool to match what I have.

Then there is the dreaded 'rat tail', the tapering off at the end. I just hope that goes well, and I hope that it will all lie flat! This is always a big worry because it is impossible to see all of this the way it is folded up.

I guess I will know soon enough!
Wish me luck!

Anyone live in Illinois? Watch out for your cats!

I belong to Alley Cat Allies, an organization that advocates for stray and feral cats.
There is currently a bill pending in the Illinois legislature that would drastically increase the number of cats captured and impounded in shelters. Many of these cats would be killed. This includes house cats who have just been let out of the house.
I find this really disturbing!
To read more and perhaps help if you are in Illinois, go to:
http://capwiz.com/alleycat/issues/alert/?alertid=13055536&PROCESS=Take+Action&external_id=10519.0
Posted by Erica at 9:14 AM 2 comments: