What a pleasure it is to work in color!

I apologize in advance for the pictures I really think the reason I have been posting more, is the trouble I have getting good pictures of this sampler. Click on the pictures for better view.

Here is the completed part 3: 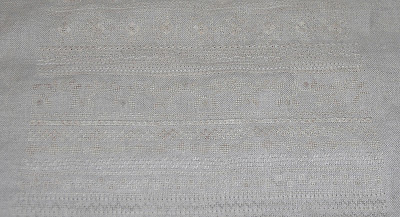 I have started part 4. This is what I have so far: 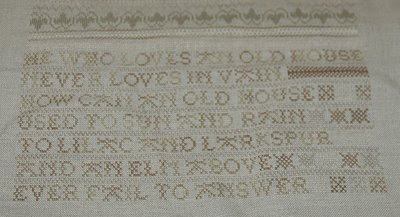 This is the whole sampler so far: 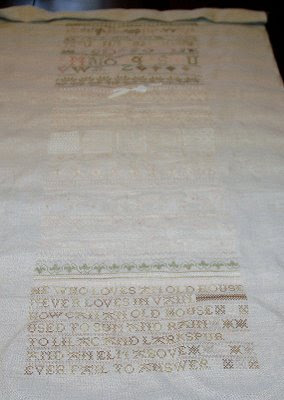 I am moving right along on part 4, but I am a little afraid that I will not have enough of one of the colors to finish. Oh, I hope it makes it. Otherwise it will be the third time I will have to go back to Vicki Clayton to request more. The thread package was supposed to be enough for the whole sampler, but something went wrong somewhere along the line. It is a little stressful worrying if you will have enough to finish.

Thank you to all of you who have left comments or emails. It is really nice to know there are so many nice people out there!

About the bees: All of the hives are a little weak due to all the rain. (I swear it rains every day here in NY)! The bees do not come out in the rain or on very cloudy days, so they have not been too successful making honey. We are watching closely the damaged hive. We still do not know if they were able to make a new queen. It will be another 10 or 12 days before we know for sure.

Even though I have not been posting regularly, I have been reading your blogs every day. They are positively inspiring!

Old Aviary Update and Thanks!

The first thing I want to do is to thank everyone who left a comment about the bees!I really appreciate it! I guess we were a bit shaken up by the senseless act of violence.

Keith was worried that whoever did it would return, and decided not to wait for the weekend to move the hive that was closest to the cemetery. We still don't know if it has a chance, but he wanted to give it every opportunity. He waited until dusk when the bees are quiet, and picked up the hive to move it away from the cemetery, and closer to the center of the property.

Well it wasn't exactly a smooth move! The hive started to come apart, and needless to say, the bees were not pleased! He did manage to transfer most of them, but a few remained at the old site. Poor things! They have been through so much! Even with all that uproar, Keith did not get stung!

Yesterday early in the morning, he returned to the old hive site and found a cluster of them all huddled onto a stick. He picked up the stick and moved it to the new hive site. The bees were very calm and clung to the stick while he was moving it.

Most of the bees have been transferred now, but there are still a few milling around the old site. Keith put the temporary white box (this is the box the bees come in when you buy them), near the site. It was raining last night, and most of the bees went in it, so he is hoping to transfer the rest of them tonight.

Who knows if we are doing this right! We are still amateurs at all of this. I guess time will tell.

On the weekend we are going to post NO TRESPASSING signs. I don't know if that will do any good or not, but atleast now they have to walk quite a bit onto our property now to get at the hives.

I will keep you updated.

Now for some stitching!

I ran out of the main neutral color silk for the whitework. I contacted Vikki Clayton. She has excellent customer service and sent more very quickly. She was surprised that I ran out and said that she had sold 35 conversion kits for the Old Aviary, and no one else complained. I really don't know what to say about this. I am using single thread, and I am really stingy about the way I stitch with it, using up every bit! As I told her, it really wasn't even close! I only made it halfway through part 2, and had a long way to go.

Oh well, I think maybe some of those people ordered it to kit up the project but haven't gotten as far as I did. Still, it bothered me. Makes you wonder if you are doing something wrong.

Here is a shot of a finished Part 2. 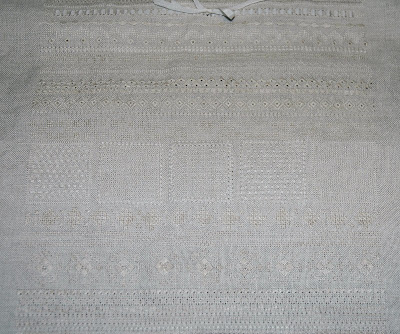 I know this is whitework, and it is supposed to be light, but it does bug me that it doesn't show up a little better. I hope it will show up well enough when it is finished, and I haven't gone through all this for nothing!

Here is a shot of parts 1 and 2. I am sorry it doesn't show up a little better. 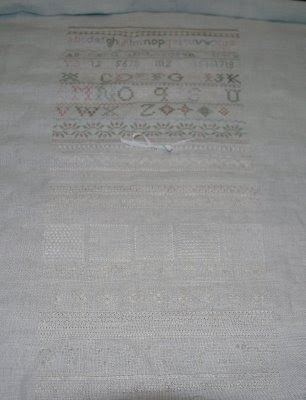 This is my progress so far on part 3:

Here is a closeup of the half-Rhodes, one of the specialty stitches used:

I was considering tea-dyeing it when I am finished. My thinking was that the silk might soak up the dye more than the linen would, and hopefully make it stand out a bit more. Mmm, not sure about that just yet.

Well there you have it! That is what I have been working on!

My other news is that I have won the Rabbit Rondel drawing on Riona's blog, Oubliette! I am thrilled!

Update on the Bees

Some time ago we decided to give beekeeping a try.

We have always been environmentally minded, and are very aware of the plight of the bees in our area as well as the globe in general.

Our property is certifed by the National Wildlife Federation as a certified Wildlife Habitat. We have pledged to help the wildlife by providing a friendly place for them. We have many bird houses, feeders, etc. We also do not use chemicals on the lawn which are responsible for a lot of ecological problems.

I confess to being a little leery of handling the bees at first, but once they were set up, I saw how gentle they were, and how easy it was to manage them.

It is amazing how attached you can get to these gentle creatures!

Our property is 1.27 wooded acres, and we are bordered on one side by an old abandoned cemetery. There is plenty of room, and the bees are located deep in the woods, and are certainly not a problem to anyone.


Yesterday we discovered that someone trashed the hives!

We figure they came through the cemetery to get at them.

The hive that was the smallest, was completely trashed. They took rocks from the stone wall and threw them at the hives until they knocked them over!

The first hive was completely opened and exposed to the elements. We don't think the queen survived. They can make another queen if they have brood (eggs), but that was all exposed and surely died. (The hive must maintain a constant 98.6 degrees to sustain life, an interesting parallel to humans).

The next hive was only partially turned over, so we are hoping the queen survived. Only time will tell.

The third hive fared the best. That one has marks on it from where they threw the rocks, but is pretty much intact. We figure that the bees were swarming by the time they were approaching the third one.

On the weekend, Keith is going to move them to another location. He feels certain that whoever did this will return to try again.

As long as I live, I will never understand this behavior!
They are such gentle creatures that do not hurt anyone unless really provoked! It is actually hard to get stung! It is amazing how attached you can get to these creatures. I feel very bad for them

As Keith says, this is the price we pay for living in suburbia, where most people have no true connection to the land, no appreciation for nature or private property!
All they seem to care about is their chemically manufactured lawns and their property values!


It is not bad enough that the bees are facing colony collapse syndrome, no, they also have to put up with idiots who have to destroy what they do not understand!


Unfortunately we did not take pictures of the damage. Keith wanted to get the hives back together as quickly as possible, and did not stop to take pictures. It was a pretty ugly sight!


Here is a picture of the hives in the early Spring when they were first set up. 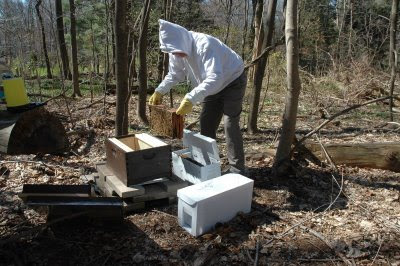 Here is one of the little guys on a blackberry bush. 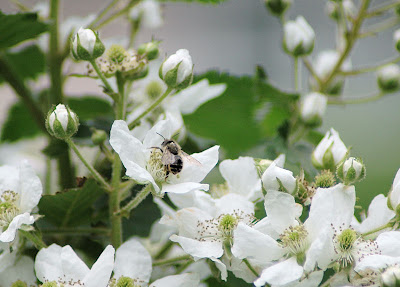 I don't know if "karma" is a real thing or not, but if it is, I really hope the creeps who did this, get what is coming to them!
Posted by Erica at 11:28 AM 8 comments: