Do You Feel Lucky?

Win "Where There is Life" 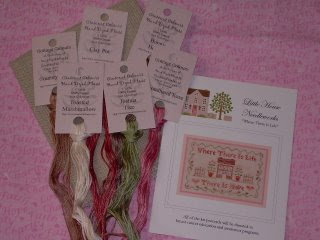 The design is by Little House Needleworks, Crescent Colour, and distributed by Elegant Stitch.

This is a complete kit, including the chart from LHN, full skeins of CC and Zweigart 28 count flax linen, all pictured. You can find more about this kit here.

TO ENTER, all you have to do is stop by, http://stitchpink.blogspot.com/2008/02/win-where-there-is-life.html and leave a comment!

This is a great way to bring attention to such a good cause!

Good luck!
Posted by Erica at 1:52 PM No comments:

Moving right along on "The Chase"

Well, I have finally finished all the flora and fauna at the bottom of the sampler. There was a ton of detail on the animals. Then they all had to be outlined, so it took some time.

The berries were interesting to work. The berry itself was worked in a darning stitch. First I made several long vertical stitches. Then the thread was actually woven under and over the long stitches to create the effect. Then the berries were outlined with the outline stitch. 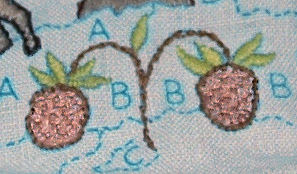 Now I am working on filling in the landscape. It is all done in a long outline stitch. This part surprised me. I thought it would go faster (no going back and forth to the pattern). The long outline stitch is a little tricky on this fabric. If it were done on 28 or 32 count, even 36 or 40 count linen, the holes would be easier to find. This is the older kind of Belgian linen that is very dense. It is often necessary to puncture the fabric to get the needle through.
We are all used to working horizontally, but the long-outline stitch is worked vertically.
You have to be careful, especially in the long runs along the border, to keep the lines relatively straight. There is a tendency for them to "lean".
This part is going very slowly, but atleast I can see the light at the end of the tunnel!
Next, I will have to figure out how to proceed with the verse and the signature.
By now, I am just itching to finish this!
I still haven't decided what my next project will be.
I do have to work on my braided rug again, so I am looking for something light to work on in-between.
Posted by Erica at 2:16 PM No comments: 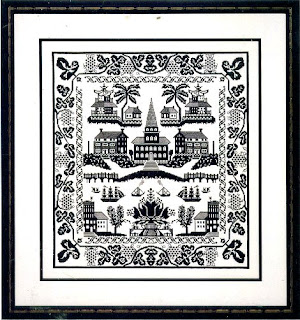 I have finally gotten a copy of Village-by-the-Sea"!

YEA!!!
I have been after this one for ages!
Many thanks to Sue, a wonderful seller on ebay!
Sue has the inventory of a closed needlework shop. She sells under the ebay name of stitchnut. She has both current and vintage designs, kits, fabric, fiber and books!
You never know what she will be listing next! On top of that she offers great service with reasonable shipping rates!
If you are looking for a particular item you should check her listing. She may just have what you are looking for! http://search.ebay.com/_W0QQsassZstitchnut
Here are some more goodies I got from Sue! 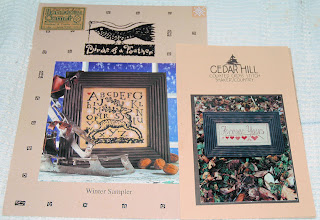 I have wanted to do this sampler for a very long time, so before I decided which one I wanted, I did as much research as I could.

I was never able to find a picture of the actual sampler. Although it was stitched in New England, the original is in the Williamsburg collection.

The one I picked was the Paragon kit version ("The Chase"), that appeared in America Home Magazine in 1970. At first it almost seemed like cheating because the design is stamped on the linen. I had become used to doing counted cross stitch, but I came to appreciate the detail that went into reproducing it.

Another kit was the Elsa Williams version. I didn't choose this one because it was all cross stitch, and I wanted the sampler to have the stitches that were in the original. The different stitches give it a wonderful 3-dimensional effect.

Another pattern is "The Newburyport Sampler", from the Samplar Workes 1995. (See picture below). This one also has many of the fancier stitches. 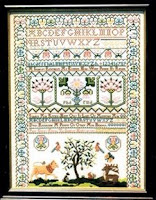 I had it next to my desk and kept staring at it. There was something about it that bothered me, but I couldn't figure out what it was!

Then it hit me! The sampler is too perfect! It was made for modern eyes. It is perfectly symetrical on both sides with the pictural design falling neatly between the borders.

It is a beautiful sampler, and lovely to look at, but it does not look to me as if it were done by an 11 year-old, no matter how good she was!

Then I did more research and found pictures of actual samplers from Newbury(port) around that time. They most ressembled the Paragon kit. I am not a historian, but I do enjoy working on a piece that is closer to the original. To me the Paragon sampler looks like it "grew" as the design grew. The borders seem to expand because the pictural design didn't quite fit between the borders, and had to be adjusted!

I find that kind of imperfection comforting!

Progress on "The Chase"

A bit more progress to report, but it is still very slow-going. 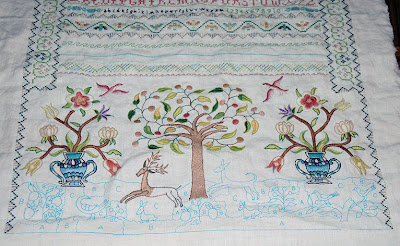 I finished the borders on both sides, and I have finally finished the urn! That urn took forever! Each section is done with a satin stitched and then outlined. Some of the areas are quite tight to work in.
The next step was to do the antlers on the deer which was all done in outline stitch. A lot of ins and outs!
Then, on to body of the deer, with a French knot for the eye. Right now I am working on the largest part of the body which calls for a "long outline" stitch. I was having a hard time to get this to look neat, and wound up taking it out several times. I still don't seem to have the rhythm of it down!
By the time you get to the end of a section, you have really mastered the stitch and you wish you had done it better in the first part! I guess that's how the school girls who first worked on samplers, must have felt also!
Originally I wasn't going to put in any verse. There isn't any place marked for this. It is just mentioned on the front of the kit. I spent a lot of time trying to find a picture of the original online without any success. I did however find a later sampler circa 1815, also from Newburyport. It was very similar to this one. It appears that the verse was originally just above where the two blank lines appear. I think in this design, the area where the verse went was filled in with some lines of designs (green squiggle type lines).
According to the description, the original verse was "Goodness and Mercy Ever follow [t]hose who shape there [sic] Conduct by Gods Holy Laws".

I did some playing around with the lettering. It would be really tough to fit this in just the two lines provided. It will definitely not fit in cross stitch. It would have to be done in a straight stitch I think. This will take a bit of experimenting as there are no guidelines given.
Great, just when I was looking forward to finishing this one up, now it will take even longer! I think it might be time well spent if it works though, otherwise, I will just take it out and leave it blank. I think if I didn't try, it would bother me every time I passed it in the hallway!
Posted by Erica at 3:47 PM No comments: