Since this seemed to have been the year of the chicken, it seemed only fitting that we needed a chicken ornament! 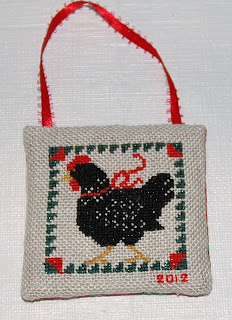 The backing is a simple Christmas print.

This came from an old Prairie Schooler booklet.


I changed the color from white to black to look like my Black Australorps. It didn't seem terribly Christmasy to me so I added some blending filament to the colors for a bit of sparkle.

We had a quiet Thanksgiving weekend, and spent some time trying to clean up after Sandy.
Keith worked on re-building the chicken run that was completely destroyed. This was very annoying because we had only finished building it last summer. 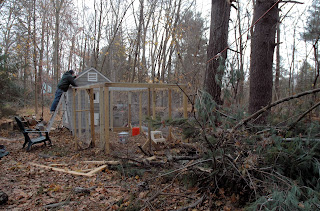 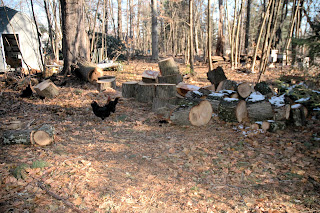 I also made a start on Freelove Hazard, even though I wasn't going to work on it until after the holidays. I just couldn't resist it! I will be back soon with some pictures.
Posted by Erica at 2:30 PM 6 comments:

I am excited to be taking part in Nicola's Scarlet Letter 2013 Challenge.

For my first sampler, I have chosen Freelove Hazard .


I have had this in my stash for the longest time.
I just love all the birds and colors in it! I also love that name! It always sounds to me like a 60's Hippie chick!

I spent yesterday kitting it up. Au Ver a Soie is my silk of choice, however I did not have all the colors. Where necessary, I substituted with Elsa Williams and Splendor. I think they are very close matches. 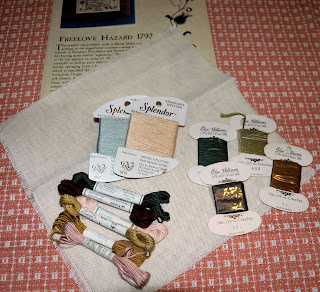 I am very anxious to get started, however I do have some holiday stitching that I need to finish, so it will be a little while before I can start.

After Freelove, I am not sure what I will stitch. I have several SL samplers in my stash, including 17 Sailors.
I also want to stitch Jane Atkinson.
Posted by Erica at 10:55 AM 5 comments:

I wanted to post about Nicola's Scarlet Letter Year challenge!
It sounds like a lot of fun!
I know I have several SL samplers in my stash, and I am hoping to get Jane Atkinson for Christmas! (HINT, HINT to those wondering what to get me)!

If you would like to join, let Nicola know. She will be getting it organized soon.
Posted by Erica at 3:40 PM 1 comment:

to all you Americans out there! To everybody else, have a wonderful Thursday!

I finished up this little ornament for Thanksgiving. 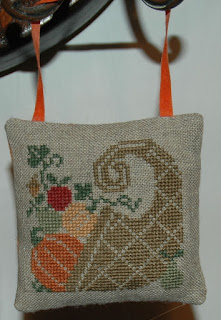 I gave it just a simple finish, backed with a tone on tone burnt orange fabric, and lightly stuffed with poly-fil. 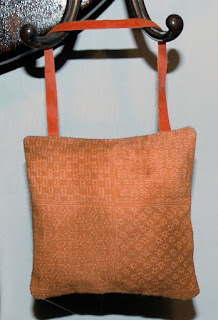 It came from this Prairie Schooler "oldie but goodie".

We are having a very quiet Thanksgiving here, just my husband and myself, and of course the fur babies!

From our house to yours, Happy Thanksgiving! 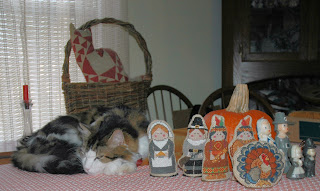 Anyone who is a regular reader of this blog knows that I love to stitch the older stamped samplers. I have quite a collection of them now. They are perfect for when I am feeling tired, brain-dead, or do not have access to my magnifier.

A while ago, I picked up one of these samplers that was about 60% completed. It was dirty and had a few stains, but overall it was a very nice sampler. From the looks of it, it had been stitched by at least 2 previous stitchers, if not more. Some of the stitching did not go in the same direction, which did bug me a little. I re-stitched one of the motifs, but quickly realized that I would not have enough of the remaining floss that accompanied it, to re-do much more. All in all, it did not look bad, so I just finished the remaining motifs.

This was a Sears Needlework Kit # 5142 published in the Fall of 1967. It definitely looked like an historical reproduction. I wanted to see if I could find out more about it, so off to Google I went.

I found the exact same sampler being sold by antique dealer/auctioneer. He listed it as, "The Fecelanno Sampler, stitched by someone in the Fecelanno family in 1850".

Fece l'anno  (made in the year)

Ok, now maybe not everyone would know that that is Latin, but if you were putting yourself out there as an expert, wouldn't you at least take the time to do a little research?

In less than 10 minutes online, I found that this was a very common phrase found on many continental samplers. There were several samplers in the Victoria and Albert collection that included this phrase.

Anyway, I completed the sampler and gave it a good soak. Most of the stains came out, or got much lighter.


And now for another old Latin saying:

Lots of orts this month! 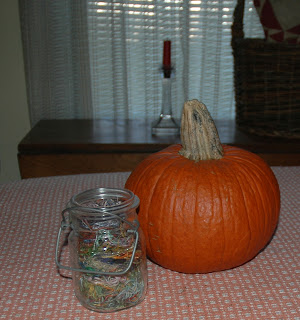 My little jar is getting very full!

I have broken one of my cardinal rules, not to start one project before I finish the one I'm working on. Boring, yes, but it has held me in good stead!
Right now, I think I have 4 that need finishing! This time of the year though, it is just too tempting not to take on a few little ornies. Hopefully I will finish them up very quickly.
Back with some photos soon.
Posted by Erica at 9:17 AM 3 comments:

I totally missed Halloween this year! It happened when we had no power or phone, and were completely cut off from the rest of the world.

I am not a big Halloween stitcher, but I do love harvest designs!

I started this several days before the blackout, but didn't get to finish it until now. 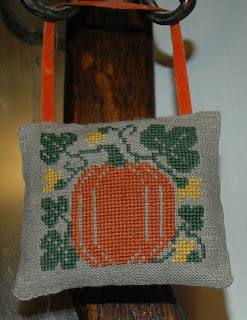 I did a simple finish with a striped cotton fabric, and stuffed it with polyfil. 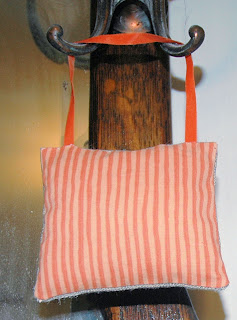 It came from an "oldie but goodie" Prairie Schooler booklet that I have had for ages.


We haven't had much of an opportunity to clean up after Sandy yet. We did make one unpleasant discovery. A large fallen tree had blocked our access to the back yard. When we went got over it, we discovered that one of the larger branches had fallen on our best bee hive!
Keith tried his best to save it, and moved the frames into another box, but the outcome is doubtful because it was exposed to the elements for a while.
Bummer!
I am really looking forward to things getting back to normal. I am sure the people who have lost much more, probably feel the same.
Posted by Erica at 2:53 PM 10 comments:

It is so nice to come back and read all of your nice normal blogs! Normalcy is wonderful! I love just ordinary days!

Our power came back on last night (Friday) about 10pm. Just when I was beginning to think that it would never happen!

Monday night with that storm was truly a horror! We lost four 50+ ft trees, and many, many branches! It was so loud, all the crashing and snapping. We knew something huge had come down because the house shook each time. The sky was lit up with blue flashes. Later, we figured out that they were all the transformers exploding. When there was a momentary lull, we went out on the deck with a flashlight. The big hit was a 200 year-old Silver Maple, which landed on our newly constructed chicken shed. When we came out in the morning, we found out that although damaged, the shed part was intact, but the chicken run was completely destroyed. Some of the chickens had gotten out and were running around. Some of them were trapped in the shed part. Amazingly, all of them survived! I did take us a while before we could count them though!
One of the trees that came down cut off access to the rest of the yard. It left a hug 15 foot hole in the ground where the roots pulled out. I don't know how, but we will have to fill the hole, though I think the tree itself will be there for some time to come!

We were so lucky that the house was spared. The divider on our deck was ripped off, but other than that, the old house remained intact. I guess someone up there was watching out for us! We spent Tuesday and Wednesday trying to clean up. We ate omelets courtesy of the chickens for dinner, and gave away some eggs to our next door neighbors, and the man who helped us pull the tree off the chicken coop.

Our road was closed because of the many trees stretched across it. Finally when the Tappan Zee bridge re-opened, Keith went back to work on Thursday. It was really awful being stuck alone in a dark house, wondering what was going on in the rest of the world! He was disappointed that the power was not on when he got home Thursday night, and Friday night.
Four days and 5 nights without power was a pain in the neck, but nothing compared to what others have had to contend with though.
I am a pretty easy-going person, but it will be some time before my nerves recover from this one. I still jump when I hear a loud noise!

I am so glad to be able to get back to stitching! I wasn't able to with the power off because I really need my magnifier light to see anything!
Posted by Erica at 2:08 PM 9 comments: