The Old Aviary is Finished!

Hooray! This has been a long time coming! I started it back in March. 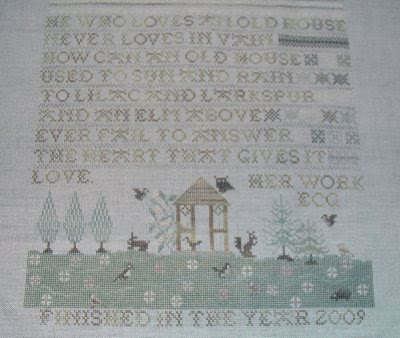 I love all the critters in this! There are many birds of course, including an owl. There is also a rabbit, a squirrel, and a very odd little porcupine! The only thing I am not too crazy about is the flowers. They are all exactly the same style. I think if I had noticed that earlier, I would have changed them a bit. All in all though, I am pleased with it.

Here is the whole thing:

I aplogize for the photo. This has been a miserable experience trying to get good pictures of this sampler. I promise that it looks better in person!

This is going to be a bear to frame, but I think I already have a frame for it, so I will give it a try. I will post a picture when it is completed.

For my next project, I chose Love is Enough, a Christmas present from my husband. I am a bit nervous about it though. I decided to stitch it on 36 count instead of the 28ct that came with the kit. I made a small start on it, and I am finding myself worrying if I have a big enough piece. That is such an awful feeling! Aghhhh! I am keeping my fingers crossed. 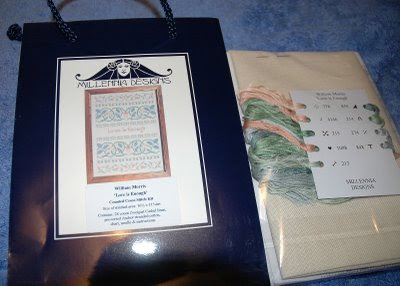 The verse is finished now. It reads:

HE WHO LOVES AN OLD HOUSE
NEVER LOVES IN VAIN.
HOW CAN AN OLD HOUSE
USED TO SUN AND RAIN
TO LILAC AND LARKSPUR
AND AN ELM ABOVE
EVER FAIL TO ANSWER
THE HEART THAT GIVES IT
LOVE. 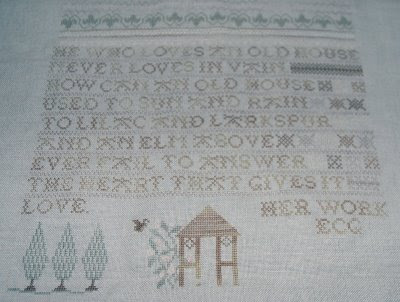 I have already signed my name, even though it seems funny to do that before I have finished the whole piece, but that is the spot it is supposed to go.

Then I moved on to the aviary part. I finished 3 trees and the gazebo. I only did one of the birds. There are many more birds and other animals in this part.

The rose bush was the most challenging. The roses are done with the ribbed spider web wheel stitch. Hopefully you can see the roses in this close-up shot. 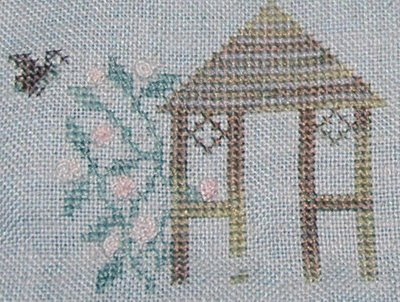 Bee update: The damaged hive is behaving as if they have a new queen! For a while there was just erratic flying about the hive, but now Keith reports that he sees the bees returning to the hive with pollen. Supposedly they won't forage if there is no queen.

Keith smoked them and peeked inside. The hive is very weak, few in numbers, but it does seem to be operating normally. Now, the big question is whether they can make enough honey to sustain them through the winter. The other hive that was damaged is also weak, but doing a little better. One of the problems is all the rain we have had this spring (over 10 inches in June alone)! The bees need lots of sunny days to make the honey. They have been few and far between this year!

Well, that's all 'til next time!