This row seemed to take forever! I didn't have any rolls of wool already made up for this one, so it took quite a while. Then I had that miserable cold in the middle of it. (Thankfully, I am feeling much better now).

It was a real squeaker right to the end. I knew I would have enough of the camel and the glen plaid rolls to make it to the end, but I wasn't sure I would have enough of the rust colored herringbone roll. This was risky because I didn't have anything else in this tone. My closest match was a red herringbone, which actually wasn't a bad match, but it is always nice to be able to finish with the same color. I made it with 6 inches to spare! 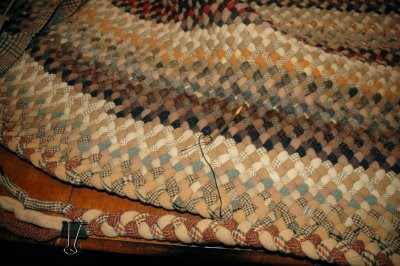 The rows now are so long that it takes enormous amounts of wool to make one round. Usually one fabric will not do it so I have to match similar colors and patterns.

I am also getting antsy with Peace in the Country. I finished the angel's dress and gave her some feet. Now I have to finish back-stitching that area before I can more on. I also finished up a few of the stars to see what they would look like. This design was much larger, and far more detailed than I thought it would be! 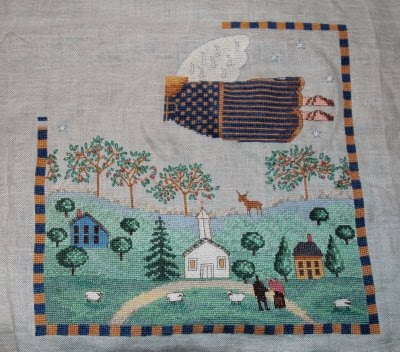 We still have quite a bit of snow here, but it is slowly melting. We have been promised sixty degrees this weekend, so no doubt it will all be gone soon!

It seems like it has been a long winter. I am ready for spring!

Great progress on both your projects. I love Peace in the Country, it's a very lovely piece.
We've also had a very long winter so far, and it doesn't seem to end. Yesterday we got tons of snow again after a couple of days without. I'm also ready for spring but nobody seems to hear me, lol.

Its funny how some of those small quick looking designs actually are a lot bigger and take far longer than we imagine. However you are making excellent progress and its looking good..

Excellent progress on the rug too, wow what a labour of love.

Wow, they are coming along beautifully, love the rug!

they both are moving right along

Both progress are looking great!

Great progress on both your rug and cross stitch. Bet you'll be sooooo glad when they are finally finished.