Hooray! Row 54 is finally finished. The colors on this one were a bit dull, but I was really scratching to come up with the wool.

The next row will be a bright row. I have lost the order of my bright rows here, but it is necessary toward the end of the rug. I will be putting the bright color in one row early because I do not want to end the rug with a bright color. 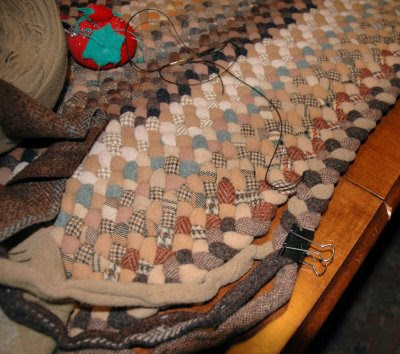 The Old Aviary is proving to be very frustrating to photograph. Maybe there is some secret to doing this that I don't know of, but the pale colors make it very difficult.

Instead of taking the whole picture, I have included the right and the left sides. Hopefully it won't look so washed out. 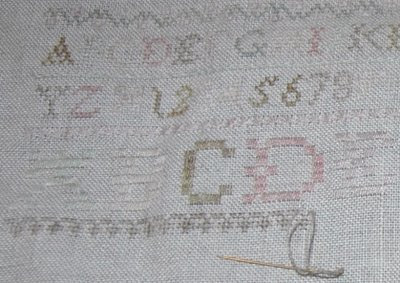 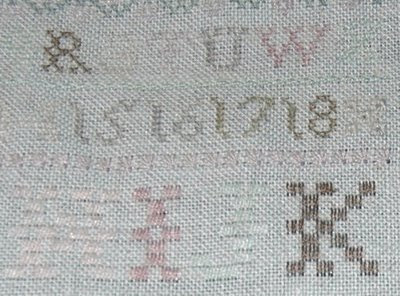 The first row of letters is a small uppercase alphabet. This is done in satin stitch over 4.

The next line is the pale green divider in a herringbone stitch.

The next line is the remainder of the letters and the start of the numbers. At the beginning and end of the numbers is a group of 5 eyelet stitches. There was a huge amount of frogging going on with this! I re-did it several times before I was satisfied with it. There are 31 points in each eyelet stitch. This is really tough to see on 40 count!

After this, there is a divider row done in the Ray stitch, in a pale orchid.

The next row is a large uppercase alphabet in the satin stitch.

I have just started the next dividing line which is all in cross stitch in a light taupe.

The tiny stitches on the 40 count are proving very challenging, but I am enjoying it. One thing that I have learned is that I cannot work on it for as long. Frequent breaks are necessary!

Such beautiful stitching! I love samplers like that. And your braided rug is amazing. It'll be so fun to watch your progress.

For whatever reason, the eye can see some colors that the camera just doesn't pick up well. But even so, The Aviary looks lovely!

I also have to say, I'm looking forward to getting my move over and done with for many reasons, the most driving of which is that I'm going to try one of those braided rugs. Watching your progress has been inspiring to say the least. I've got my cloth picked out and if we get the house we're trying for, then I'll have the space. Now all I need to do is get moved! lol

you have been doing a wonderful job on the rug.

A very beautiful sampler with very nice specialty stitches. And even ig the thread colours aren't very well visible on the photo one definitely gets the picture of how delicate the sampler will looks.

I love it ! Very creative ! That's actually really cool Thanks.