Some Progress on Freelove Hazard

I have been spending much of my time finishing up some small items and holiday stitching. I hadn't planned to start Freelove until after the Holidays, but I just couldn't resist anymore!

She is being stitched on 25 count unbleached linen, using silks.The majority of the sampler is stitched one over one, with the exception of the large capital letters, and the border. I was concerned about the floss coverage. One over one looks just fine, but I was afraid that the one over two looked a bit sparse. The instructions were quite clear however, that if silk was used, only one strand should be used. I guess it is a matter of getting used to the look. 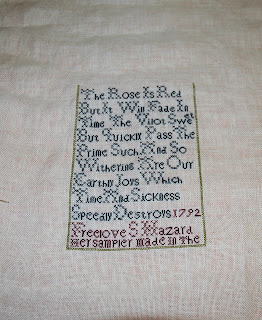 
Not the cheeriest of sentiments for sure, but it was typical for the time.
Posted by Erica at 3:23 PM

Wonderful new start! I love this sampler, and I think the coverage (and stitching) looks great so far!

I think you are going to have the honour of the first finish in our gallery. Go for it Erica Freelove will look very good there.

Looks wonderful! I stitched Freelove way back when. Why do I not remember the over one? lol!

It is looking great. You are brave for all that over one!

Freelove wasn't the most cheerful of gals, now, was she? LOL I love those morbid sampler verses, though! Nice progress!

Hi. You have been awarded the Liebster Blog Award. You can view it at http://sometimesiamnotnice.blogspot.com/