I really thought I was making good progress, but in the back of my mind, I think something was bugging me! It turns out that the symbols for yellow and gray are soooo very similar! Yes. You guessed it! Everywhere I have stitched in yellow should have been gray! The letters, the dividing bands, and worst of all, the vines running along the borders! It turns out that the only place yellow is used in on the house! 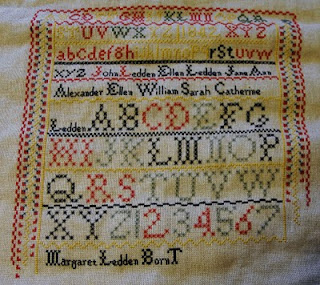 I usually go a bit more by the picture, but in this case, the picture that is included, is so tiny it is practically useless!
If it were not a historic sampler I might be tempted to leave it the way it is, but I know that it would just bug me!
It isn't the re-stitching that I mind so much, but oooh that frogging!
UGH! UGH! UGH!

Wellll, I think it looks lovely just as it is :) Sorry that you have to frog.

What a bummer! Sorry you have to do all that frogging. :(

Keep in mind, bright colours were used in schoolgirl / antique samplers -- what we see now are colours that have faded.
I think it looks fantastic!

Erica, I hope you decide not to frog this one. The yellow looks great with all the other colors, and you can still use the grey for the house. Just consider this version your own adaptation! You can always stitch the reproduction another time for a "matched" set!

*faints* I've done that before. I don't think I would be up to frogging that much!