Febuary was not a good month!

It is bad enough to have one sick pet, but two is just unbelievable!

First our 15 year old Willie became blocked. those of you who have male cats may be aware of this condition. Some cats are just prone to it. To complicate matters, Willie is also diabetic. Anyway, he became blocked so we took him to our local animal emergency hospital. They inserted a catheter and successfully unblocked him.

We took him home only to have him reblock about 12 hours later!

Back to the hospital! This time they kept him for several days.

Our regular vet was not available and we were receiving varying updates from several doctors.

The last night he was there the doctor seemed optimistic that he was doing ok. The next morning another doctor called saying that they had to remove the catheter and they weren't sure if he would unblock or not. She felt that he needed to have surgery (PERINEAL URETHROSTOMY "pu" - basically, the penis is removed and a new urinary opening is made - your basic sex change operation - poor Willie!). Unfortunately their surgeon was on vacation and she didn't have any othe on call. She asked me what I wanted to do.

I found it unbelievable that an animal hospital would not have a surgeon on standby. That is afterall, why I brought him there because of their facilities.

Well, to complicate things further, this was also the day of the giant blizzard! I had to go get him and transport him with the catheter inserted, to an animal hospital in New Jersey!

Thank God for 4-wheel drive! We could hardly see the road in front of us on the Thruway!

They took Willie in right away and did the surgery. He was back home the next day.

He is still recovering, but he is coming along well.

Well, while this was happening, my cat Max, had some sort of attack. He lost the use of his hind legs. I saw him favoring one of his back legs. The next thing I knew he fell head over heels all the way down a flight of stairs. He could not get up on his own.

Back to the hospital!

After blood tests and x-rays, they still don't know what is wrong with him. Yes, he has the very beginnings of what is probably kidney disease, but they say his numbers are not very bad, and that had nothing to do with it.

We now have to take him back to see a specialist for more tests. He has made a little improvement. He is now able to get around a little better, but he is still weak.

We are just reeling from the astronomical costs associated with all of this, and we are not through yet!
My nerves are shot!
Anyway, I don't have a lot of stitching to show here. I am still working on the 3rd of the 5 panels of the Country Garden quilt.

My only picture is the Febuary edition of my Totally Useless Stitch-along (TUSAL). Still only 2 shades of pink in there. I am longing to see some other colors! This is one of these projects that seems to take forever! 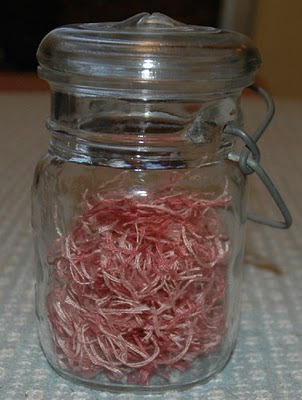 So sorry to hear about your trials with your cats. How awful! And to have to drive in that storm! We were out in it so I know how bad it was! I hope they find out what's wrong with Max and that he recovers -- and that your unblocked cat is better too.

What I forgot to mention was that, when I had to take Max to the hospital the next day, I lost my brakes about half way there! Apparently all the snow from the day before broke the brake line.
Talk about S T R E S S !!!
Oh well I got there and back ok.
Another expense in Feb!

Ask your vet, but it sounds like your cat had a stroke. google it and you can find symptoms. Our cat had 3 in the last 6 months. The last on we lost her as she just couldn't move. Hope your boy is doing better.
Carmen

I'm playing "blog catch up" at the moment so I hope that by now both cats are feeling better. One of our cats, Louis, also suffers from blockages so I know how painful they can be for the poor kitties. Hugs to Willie and Max