Hooray! "The Chase" Sampler is Finished!

Last night I finally finished the verse on "The Chase"!

I am not entirely happy with the lettering on the verse but there are only so many times you can pull it out without damaging the linen.

There are issues with stamped linen. I stitched in the original verse, however this was not the intent of the kit maker. It was meant to be left blank, or to have you stitch in your own name. The design is stamped on the linen, generally with the grain, however the count is very dense. I noticed that the two stamped lines for the verse were not exactly straight. This made it difficult to square up the letters.

Also, I am not entirely certain of the numeral on Mary's birthday. My best guess is that it is January 9, but it is hard to be completely certain.

I signed it by the urn. 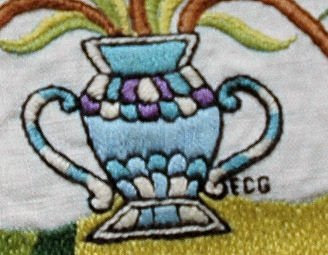 All that is left to do now is to gently wash it, mount it, and frame it.

I will have to go to the framers for the frame because of the unusual size. It is about 17" x 25".

I have been collecting frames for years, and yet somehow I never find the right one in my attic!

Here is the finished sampler. Not the greatest picture. I will take another one when it is framed. 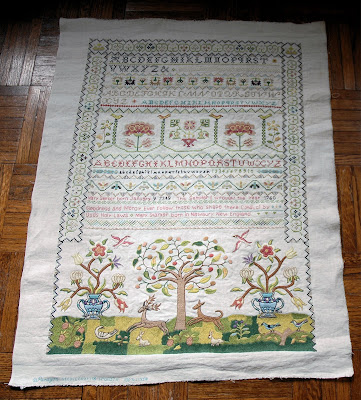 You did a wonderful job on the sampler! I ordered the same sampler from a seller on eBay, but it did not come with any of the thread. Do you have any idea of comparable colors in DMC (of which I have lots) or other brands for the PeriLusta floss? I can't find a conversion chart anywhere for PeriLusta colors.

Hi Glenell,
Thanks for your kind words. I didn't have any way to get in touch with you because there was no email link.
Originally I wanted to stitch it in DMC because I was not sure I had all the floss that was supposed to be included, but I couldn't find a conversion anywhere. Peri-Lusta was made in England, but as far as I can tell, it is no longer made.
The colors used are not unusual in any way however, and I am sure if you use the picture, you will find a replacement in DMC. You may have to buy a color card, but I don't think you will have any trouble.

Thanks, I'll be looking back at your photos as I work on mine. How did you frame yours?

Erica, I too did the Chase Sampler. I am very slow - it took 11 years, in fact!! Obviously it was not being worked on most of the time. It is the cross-stitch of which I am most proud. My kit was stamped - but no where were the words given. I wanted to put them in, and even went to Williamsburg, VA and saw the original and couldn't make out the words. Can you please tell me what they are? Mine is framed but I may well take it apart and have it reframed. I really want it to be as authentic as possible. My e-mail is anniemdaffodils@cox.net. BTW, the original is in poor shape, they keep it in a locked drawer and that part of the museum is only open a couple of hours a day. The things that are in the drawers have to shown to you by a docent. It's well worth it though.
Appreciate any and all help.
Annie M

I would like to buy any left over thread from anyone's Chase kit. I bought one on Ebay with no thread only to find out its Peri-Lusta and now can't find thread.

I finished The Chase this week after 30 years! I happened to be visiting in Williamsburg. It meant so much to see the original.

Suzy: I have leftover thread from the Paragon kit.

Hi I think I sent you an email thanking you for offering your leftover thread. I would love to get with you to work this out.

Hi Suzy,
I have tried to email you before, it just bounced back.
Unfortunately I cannot find my leftover thread anywhere. Someone else asked me too.
Our house was under construction during that time and it is possible that it got lost/thrown out. although I certainly would not have done it consciously.
I do remember that there was not much left, just a few strands. I got the kit second hand, and had to substitute using the picture as a guide.
Sorry, but I'm not sure it would have done you much good anyway.
The substitutions worked out well though, so don't be afraid to try it.
Best of luck to you in finishing. It is a piece that is worth all the trouble!

D,
Congratulations on your finish!
It is really worthwhile finishing this one! I love it even after all this time. It gets a lot of comments too when people see it hanging up!

My thanks to Sandra G. for sharing her thread with me. I know I'm good to go on my sampler - except for time.

Anonymous - I'm unable to find your comments on this site. I've received several emails re: your posts but don't know how to find them.